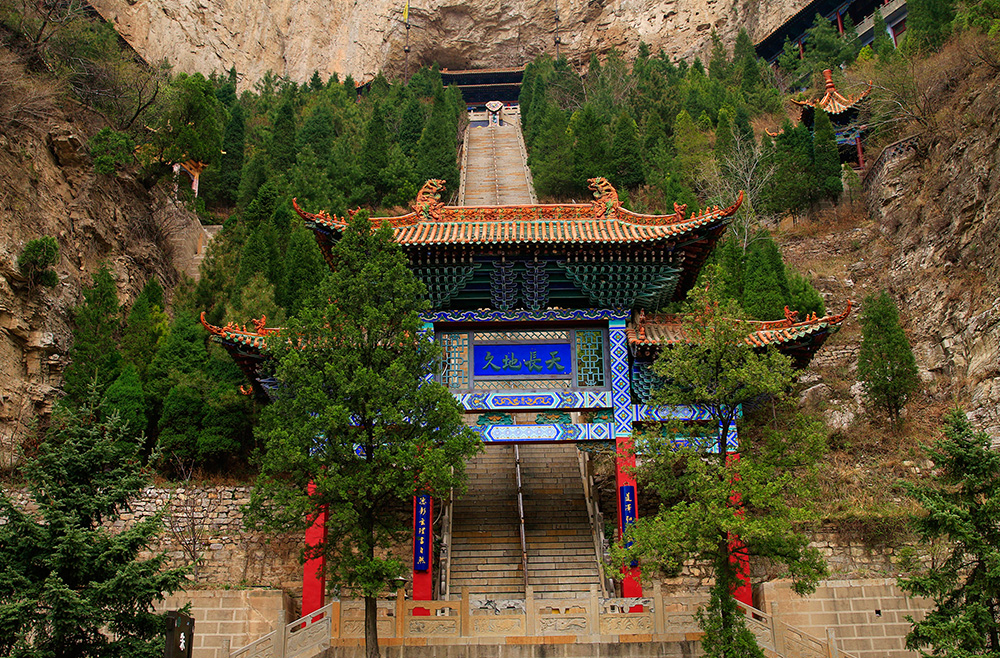 Zhujiaao scenic area is located in mianshan mountain scenic area of jiexiu city, jinzhong city, Shanxi Province. Zhu wu4, the father of zhu yuanzhang, emperor taizu of the Ming dynasty, was here to practice Buddhism and worship lingbao god. When zhu yuanzhang declared himself emperor, he thought he was the emperor of heaven, so he followed his cousin on mianshan worship. A breeze blew the hibiscus flower off his sister's head, and the ground grew the hibiscus pine which is still growing vigorously. Later, zhu yuanzhang sent his 17th son zhu quan (no. Han xu) on the mountain to repair ling baodian.

12 of the sun, Ming dynasty zhu yuanzhang Zhu Hou 熜 believe in Taoism, in 21 years jiajing (1542) on continous mountain worship ancestors actually jiao zhai method altar. There are shrines, panlong ladder, yingxian pine landscape. Monuments everywhere, great view. Hall front worship on the qinglingbao god, also known as too on the way, is the second zunshen in the three qing dynasty. His head was round, his eyes were full of mystery, his left hand was empty and his right hand was empty, symbolizing the beginning of heaven and earth and the beginning of Yin and Yang. Two sides of the golden child hands hold ruyi, two sides left for the hole xuan left really zai, hole xuan left true, right for the hole really zai, hole xuan right true.

The top of the hall is suspended plastic. Left for kuafu chasing the sun. Our ancestors are a love of light, worship the sun of the tribe, the tribe of a giant named kuafu. One morning, he pursued the sun with a peach-wood crutch. Because of thirst, he drank up the water of the Yellow River and the weihe river. < / p > < p > catch up to the letter valley pass, the sun is about to set, kuafu a hurry, still drop crutch, toward the sun is dissolved. His crutches became peach forests, his bones turned into mountains and earth, his hair and beard turned into vegetation, his veins merged into rivers, lakes and seas, and the five viscera became the five mountains. Right for chang 'e. Chang 'e was houyi's wife. Hou yi shot the sun, yao pool gold mother in order to reward him to protect the people below the eternal power of life, gave him a piece of gold, one person food above heaven into an immortal, two people food immortal. Hou yi and chang e about the good points of food elixir, in order to grow together. Chang e was curious and ate the elixir alone. When she flutted to heaven, a jade rabbit bit hold her skirt, with her to heaven. Chang e felt negative houyi, ashamed to see the fairy, they live in the palace.